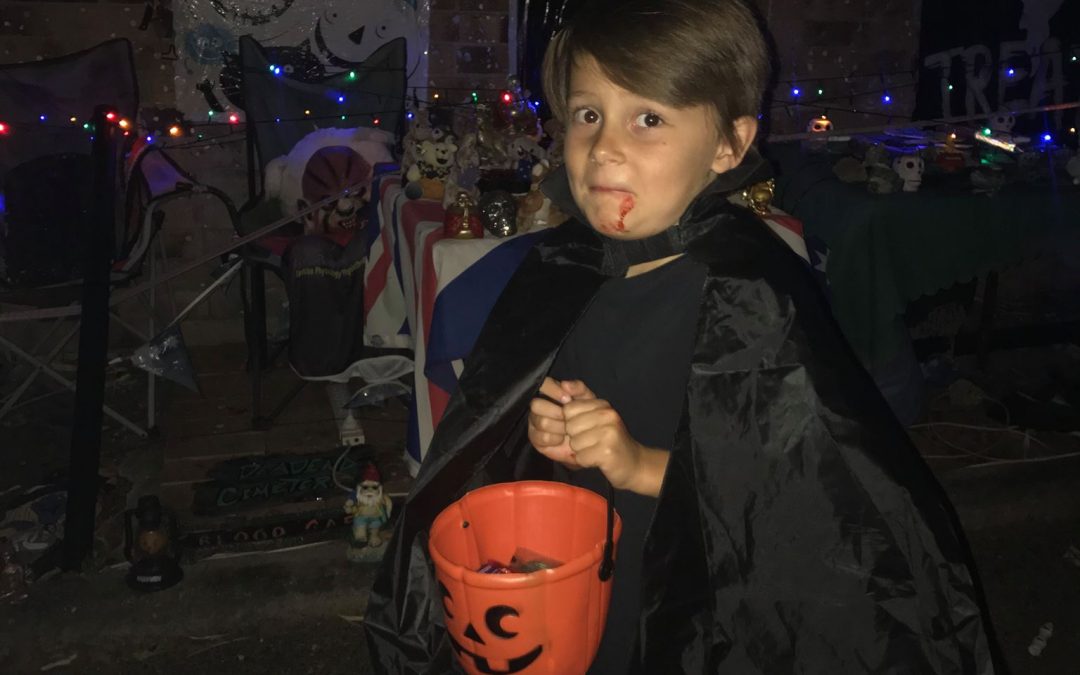 Halloween almost came and went in our house.

We had a costume, two actually, but I must admit I'm not crazy for big efforts around holiday times.  I felt a bit bad, after all I grew up on trick or treating, it's an ancient and much loved ritual in the UK.

My intention was to not mention it hoping it would pass unnoticed.  In my defense, and in case you feel bad for my son, you should know he'd already had his friends over for an after school play and a swim, and he'd also been to the park on his bike.  He's only 7, that's enough, I thought.  But at 6:30pm I suddenly felt a pang and had a flash of inspiration. "Hey wanna throw on your costume and go trick or treating at the Halloween friendly house we spotted earlier on our walk?" I said.

He didn't take any persuasion. So we hopped in the car and drove around the corner (it was getting late) to the one house we knew we'd be welcomed. Sure enough they didn't disappoint. In fact they were just off out themselves and offered for us to come along with them and a group of local kids. My son was delighted to trick or treat with his new  maskedghoul, ghost and witchey friends.

And I knew then I was right to act on the inspiration, our timing had been perfect!

It was on the way home however that things took a weird turn.  I had another thought. Across the road and up a bit from our own house is a weird little town house that every holiday covers their house with decorations. And I mean covers. The house is never clear. One set of decos rolls onto the next. Halloween is replaced with Christmas, and Christmas with Easter and Easter with Halloween (not even joking).

It's messy, think hoaders but on the outside.

In fact it kinda looks like a Halloween truck literally pulled up and dumped a load in their garden, spewed up on the walls and fence and then sped off.

I imagine it's a real hit with their neighbours (not.)

"Surely they'd be Halloween friendly? "Let's stop in there" I said. I've no idea who lives there, I pass every day but have never seen a single soul. But, hey, maybe they'd love a drop in, they must love Halloween and it might make their night, right?!

But as we neared the house the doubts, like cobwebs, started creeping in. There was so much crap in the garden there was literally no access up the front path.

"No worries, "let's try round the back."

'Halloween Party This Way' signs gave us hope, but as we got to the back gate, which was ajar, we started to feel a little unnerved by the sheer volume of stuff. Skulls and blood stained sheets draped from the tree. The fence was drowned in axes, hanging heads and old bloody rags. We pushed the gate and inside the back was the same as the front: chockas.  As we made our way up the path to the door, amazingly the house looked the same on the inside as it did on the outside.

It was like walking into some weird old Halloween museum. Having grown up with Halloween I'm no scaredy cat, but the energy was off the charts heavy.  And half way in my son said to me "Mum, this doesn't feel right, I want to go."   I was curious to see who lived here, but I had to admit it, my gut was agreeing.

So we turned on our heels and like a couple of bats outta Halloween hell we ran.

As we sat back in the safety of the car, we laughed.  And then out the corner of my eye I noticed someone hobbling up the street. She was dragging what looked like a large kitchen bin, and appeared to be wearing an old lady Halloween costume. She had a limp, and a hunch and her face looked slightly twisted, as though one eye had dropped  (you couldn't make this sh*t up!)

As she leveled up with us though I could see it was no costume, no mask, all her.  And as she caught our eye, she scowled into the car. Woa, she certainly didnt look very friendly.  We looked at each other in silent shock, mouths agape, as we watched her limp off into the Halloween house.

And as we pulled into the garage my little guy said "Mum my gut really was talking to me back there, it was screaming loud, and it said "no way, get out." Seizing the opportunity for teaching I replied, "Wow isn't that great, you know you can always trust your gut, right? Some people haven't learned how and they end up finding themselves in all kinds of danger when they didn't listen to what their gut already knew."

As the words came out I thought of the many times that someone was me.

Putting myself in harms way in my younger years, because I didn't know how to trust my gut. No one ever taught me. No-one reassured me it was OK to listen. No one backed me up or encouraged me. Although I always knew I felt things, I didn't really know growing how important trusting my intuition was.  And I was often too afraid to speak up.

And I suffered for that.

Once home we laughed a bit more, but we both knew our guts had been spot on.

This weird and wonderful Halloween was a great little lesson in trusting our guts. I've long been teaching my son to trust his instincts, and I'll keep teaching him.

If it doesn't feel right, it isn't.

And it doesn't matter if you think something's off and you turn out to be wrong. Better to be wrong and safe than right and sorry.

When his gut speaks up, we honor it. Even when I've thought hey, its ok, just push through, I've recognised there's a more important teaching. Something equally as valuable as courage, maybe more so and that's trusting your gut and acting on it.

And who knows, maybe we were wrong and the old lady was a hoot and would've welcomed us with open arms.  Or maybe as I'd contemplated, she was lonely and no one visits her because she's a bit unconventional or considered too weird. Or maybe she is a scary, old lady (hey I've been around long enough to know not all old ladies are harmless.)  Either way we'll never know because trusting our gut was far more important than finding out.

Hope you had a fun Halloween! And remember, when your gut speaks, listen. It knows things the mind doesn't.